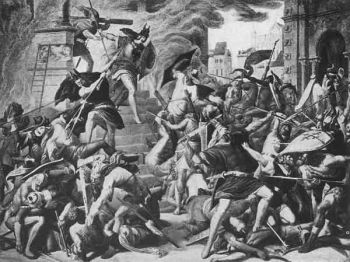 When Hitler’s death was announced on German radio in May 1945, it was accompanied by the fanfare of ‘Siegfried’s Death’ from Richard Wagner’s Ring of the Nibelungen. No wonder – Wagner was Hitler’s favourite composer, and the legends he poured into the Ring, that magnum opus of raven-winged warriors, fiery gods and Valkyries with long golden plaits, were the ‘national myth’ of Germany. Their most complete form is in the medieval epic known as the Nibelungenlied, a tale of fierce warriors cutting each other apart, prophetic river-maidens, a vengeful queen, a female warrior who cannot be defeated except by trickery and knights who slake their thirst with human blood. It’s a book that makes Game of Thrones read like the adventures of Noddy. Seriously. When I first read it, swiping the last page in a Rhineland eckkneipe with a glass of beer on the counter, I struggled to hold my drink because my hands were shaking.

These days, the Nibelungenlied feels increasingly, depressingly resonant. It’s not just that it’s been re-claimed by right-wingers in Germany, cited in speeches by the Alternativ für Deutschland (to counterweigh that, the story’s also been reclaimed by poets and playwrights in many exciting and imaginative ways). Even more, it feels like the epic tale that explains what’s going on in Britain. Because the key battle, the bloody climax in the hall of Attila the Hun, is driven by a failure to negotiate – a breakdown of politics. ‘The conflict could not reach a happy resolution,/ And so out of this breach there flowed blood-drenched pollution.’ Neither the obstinate German councillor, Hagen, nor his enemy, the grieving widow Kriemhild, will allow themselves to bend. And so tens of thousands must die.

Britain may not face such an apocalypse yet, but there is a lesson here. Hitler and co failed to heed it – they perceived the Nibelungenlied as a stirring celebration of macho men-at-arms, the ‘heroic song’ that Goering cited to inspire the troops at Stalingrad. But it’s a hell of a lot more complicated than that (and many of the German and Austrian writers I met on my Nibelungen trail agreed). It’s not a parable, it’s a tale chipped out of the bitter rock-face of history – by an anonymous poet who lived through a deadly period of gory battles, court assassinations and diplomatic breakdowns.

But history, and particularly the behaviour of people in power, have a knack of recurring. When we see the blonde bombshell Boris Johnson grandstanding until he’s taken down by Michael Gove, we’re in a parody of the death of Siegfried, felled by a spear hurled by the wily Hagen, who decided the maverick hero was too dangerous, too hard to control. (Although Boris, it turned out, had one up on the nearly-immortal Siegfried – he managed to rise again). And when the knights tear each other down at the end of the epic, because nobody is prepared to fight for the middle ground, it echoes the impasse between Theresa May's government and the ERG, the Bruges Group, the DUP, the People's Vote Brigade and the many other factions pulling at the seams of parliament. Observing this week's 'burlesque of ranting backbenchers, helpless ministers, 'incandescent' whips and negative vote after negative vote' in The Guardian, the veteran columnist Simon Jenkins called for a reform of parliament away from a system where 'verbal knives outnumber handshakes'.

From the ashes and bones of the Nibelungen bloodbath, the nineteenth century playwright Friedrich Hebbel imagined a redemptive ‘new beginning’. Perhaps our parliament, so rotten, so badly peopled, needs something similar – a grass-and-roots rebirth (P.R., anybody?), that could help us look ahead to a new future. Perhaps, Hebbel’s version of the Nibelungen tale suggests, only by tearing down the system can a better one be given the chance to grow.