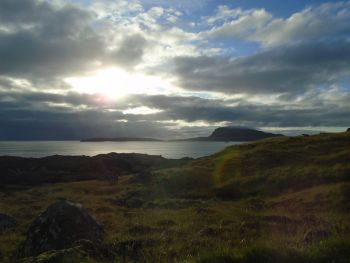 Winds blasting my cheeks and the rain's like a hundred hosepipes all pointed right at me. Don't you just love Iceland! Most visitors are sensible – they hire a car and ride the ring-road, or they fork out on a tour bus. Iceland's geared to the super-wealthy: its infrastructure doesn't give much help to the penny-pincher. But fortunately the Icelanders are kinder. I'd be stuck at a T-junction, backpack resting by the signpost, or tramping along an empty dirt track, when a pick-up or SUV or a rattling jalopy would grind to a halt. 'Get yourself out of the rain!' I'd dump my pack, careful not to jolt the hunting rifle that often occupies the back seat, and settle in for the curious intimacy and goodwill that hitchhiking sparks.

'I'm off shooting,' said Auster, a sports teacher who was on the hunt for geese. 'I go for pinkfoots,' he explained, describing the hilltop lake where he'd set his sights. 'I can tell you about it, but I'd never tell anyone around here!'

Another time, I was tramping south from the Arctic Henge when two kindergarten teachers took pity on me:

'We're off to Akureyri to watch a movie,' they explained – they'd drive two hours there, another two back. 'But we're used to it. If you want to go anywhere in Iceland, you've got to drive.'

Tourists aren't as generous, put off by the horror movie image of hitch-hikers, axes in their packs, evil in their hearts. But Icelanders tend to recognise why you're walking the fens and heaths on your own – they know their country has little public transport, especially in the north, and it enjoys one of the lowest crime rates in the world (it tops the Global Peace Index, for example, with a particularly low murder rate – just 26 reported from 2000 to October 2014).

This is a land apart, hi-tech in many ways, but sustaining trust levels long lost to most regions, a country that muddles the past and future in strange patterns. But it's no utopia – I bumped into down-and-outs, bleeding from fist-fights, and refugees struggling with life in 'the freezer'. In the Laugar area, I was picked off the roadside by a kind engineer called Elfar, who beamed as I settled in beside him. 'Guess what,' he exclaimed, 'the government's fallen – the prime minister was covering up about his father supporting the pardoning of a paedophile. So now we're gonna have another election.' 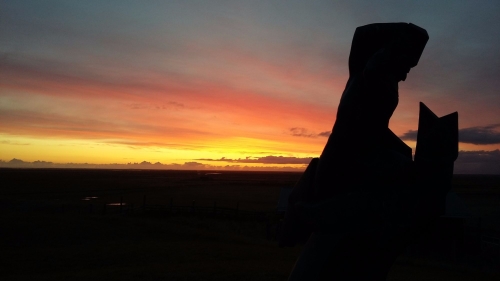 He shook his head, recounting the recent spate of elections, a run of bad governance running back to the 2008 financial crash. 'I'm actually tired of voting,' he said, 'we get elections all the time, and it doesn't make things better.'