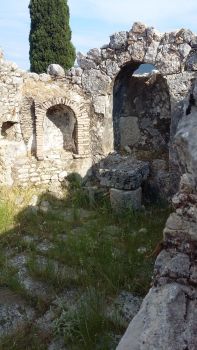 It's said that Odysseus managed to hike across Ithaka in a single day - from his arrival, loaded with Phaecian gifts, in a cave by the shore, to his arrival at the spring where Eumeaus the swineherd was watering his livestock. Well, Odysseus was a god-favoured superhero, and his upbringing on the slopes of Ithaka must have habituated him to their crazy gradients. For me, the slopes were hell - at least on the uphill. But hiring a bike meant that I always had something to look forward to - after the thigh-aching uphill stretches, the downhill plunge! Wind blasts in your face and chest, cool on the early morning rides, the heat pressing down on your shoulders in the afternoons, the road slides back behind you, like it's being pulled out from under your tyres. Far more than para-gliding or any of those knotty activities with all their safety measures, it's this - rolling down the precipitous slopes in which Ithaka specialises - that feels like the closest I've been to flying.

Ithaka is of course famous as the home of Odysseus - and that's why I'm here on the tip of a journey that's taken me from the Homeric battlegrounds of Troy. The epic tale is referenced in all sorts of ways here - from a jewellery store named after the Phaecian princess Nausicaa, to the Calypso Studios and Odyssaion Apartments, to a bust of Homer and a statue of a sea-wracked Odysseus on the waterfront of the island's main town, Vathy. The most fitting tribute to the Odyssey I've come across here wasn't on a pedestal or plinth, but moored on the waterfront - a Hungarian yacht, whose captain had sailed all the way from Troy, tracing Odysseus's sea journey according to his interpretation of the clues in the poem. 'It's a bit easier for us,' he admitted,  'as we have a modern ship and better navigational equipment.' Although like Odysseus, he had faced storms and volatile winds. A reminder of the best of Odysseus: a cipher for the adventuring spirit. 'Blessings from Odysseus,' as the local traveller's motto goes. It's amazing to think how many travellers this fascinating hero has inspired.