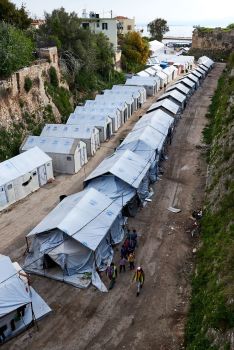 For the last month, I have been working in a school for refugee children. The school is run from an old barber’s shop and a doctor’s surgery on the island of Chios, just a few miles from the Turkish coast, an island once famous for the mastic it supplied to the Ottoman sultans, and as the possible home of the epic poet Homer. More recently, it’s become known as one of the major landfalls for refugees fleeing persecution and war in the Middle East and Africa. The UNHCR, the Greek municipality and various NGOs work together to provide them basic shelter and provisions, but one fundamental human right was missing until a year ago - the provision of education.

Which is where BAAS – ‘Be Aware and Share’ – fits in. Set up by a bunch of young activists from across Europe (with a base in Switzerland and volunteers from as far apart as Canada, Finland and Italy), the school is striving to provide the education for 6 to 18-year-old refugee children that the Greek state has so far failed to offer. For many of these children, stuck in the desperate conditions of the hastily-rigged camps, the school is a lifeline, offering respite from the nightmares they are still a long way from escaping.

I have met children who are deeply troubled, traumatised by the violence they have witnessed, suffering cognitive and concentration issues, teenagers struggling to cope with the loss of their families and the extinction of their childhoods, young adults shaking off their experiences in cities ruled by ISIS or the thugs of President Assad. The resilience of these children has often been as striking as the burden of what they have lived through. Many have developed an astonishing capacity for shaking off the past, and it’s so exciting to think what the future could hold for them, if only they could enjoy a small fraction of the luck and kindness most of us take for granted.

During the classes I’ve held or attended, students have explored the universe, learned about gravity, built model spaceships, constructed a giant snake out of balloons, composed and recited poems about their experiences, taken their first steps in the English language, written letters to imaginary future employers. Sometimes it’s been frustrating, sometimes exhilarating, always intense. For many of the children I’ve met, this is their first school experience, after several years blighted by the infrastructural collapse of their home countries. On the other hand, there are some students already well advanced in education, with ambitions to be doctors, lawyers, dentists, engineers, stretching towards the opportunities still tantalisingly out of reach. For many of the students, stuck in the awful conditions of the refugee camps, with weak hygiene, limited diet, extremes of temperature and community tensions, the school is a safe haven from the nightmare of life back home (whether home means a war-struck motherland, or the container unit or tent currently supplying shelter). 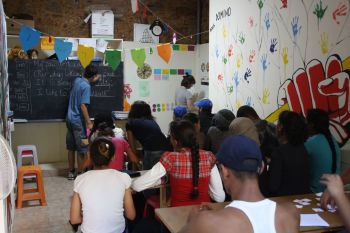 If you’re interested in helping young refugees, please do take a look at this link and consider giving something to Be Aware and Share, to support the work they are doing helping young refugees in their first difficult steps in Europe. I can tell you from my own experience that I know your contribution would make a difference.