They came to challenge his toxic brand of politics and hold him to account. To make their voice heard. To stand up to bigotry. The irony is that their voice had already been heard. It’s called the ballot box. The quirks of the American system handed victory to Donald Trump, but the target here should be the electoral system, not Trump (at least, not yet). He’s going to screw up plenty of times over the next few years, but blaming him for the election is like booing a football team for coming through on penalties when the other team had the bulk of possession. 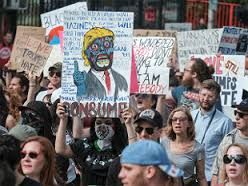 Last weekend, millions around the world marched in protest against Trump on his first day in power. What were people marching about? Women’s rights? The vague threats of Trump’s sinister inauguration speech? The hand grenade he’s hurling into American healthcare? Or was it just hatred of the man who’s turned into the world’s favourite voodoo doll? If you want to feel good about yourself, set yourself in opposition to the one everyone loves to hate. However troubled, guilt-ridden or messy your life, pit yourself against Donald Trump and you have one thing at least: the moral high ground. Is this why the anti-Trumps are being re-gilded?

Barack Obama may well have been the most personable US president in living memory, but his foreign policy was a failure. He conceded himself that the ‘shitstorm’ of Libya was the single greatest mistake of his presidency; that campaign, orientated around the 2011 airstrikes that sank Colonel Gaddafi and ripped the lid off a massive weapons cache (including 20,000 surface-to-air missiles), was managed by his Secretary of State, Hilary Clinton. Obama and Clinton, accomplished in many respects, hardly made the world a safer place. Clinton, who is slowly being re-tooled as ‘the greatest president who never was’, should be remembered for what she did, not what she could have done: a resilient campaigner, a trailblazer for (fingers crossed) a future female president, but a flawed candidate who made some ropey personnel choices and misjudgements in the USA’s global politicking. She might have been a more appealing candidate than Trump on many fronts (especially to those of us outside the US), but as a foreign policy exponent, she had a very chequered record.

Trump talked in his inauguration address of America’s ‘carnage’, but surely if any country in the world fits that word right now it’s Syria. On the day of the inauguration, Islamic State smashed up more precious remains in Palmyra, mass graves were dug up in Aleppo, more Syrians were fleeing their homeland in search of security elsewhere. These are problems that America has done much to stoke, thanks to the proxy war games spinning between CIA operatives and their Russian counterparts (not to mention America’s deeply irresponsible relationship with Saudi Arabia). How Trump’s administration will deal with the Middle Eastern challenge remains to be seen (his early phone call with Benyamin Netanyahu offers a sinister hint). His vow to eradicate ‘Islamic terror from the face of the earth’ suggests he has zero capacity for the nuances of the region, zero historical perspective and zero inclination to understand it. Of course he’s going to screw it up. But until he’s acted, until we’re able to analyse the specifics of his policies, what is there to protest against?

Watching TV footage of the anti-Trump marchers - in Britain, India, Brazil, Australia and dozens of other places – it was hard not to think: wow! The passion, the determination, the fury... The 100,000 in London were charged with the energy and confidence of people united, solidarity against a new Great Satan. But I couldn’t help wondering… if this is your response to a democratically elected president in a country that does at least have some protective infrastructure, then what do you make of all the tyrants out there? The people who’ve already committed terrible, terrible crimes against women, against vulnerable minorities, against people too young, too poor, too ill to defend themselves? Are you stamping your feet against corruption in Africa? Are you lighting candles for the dying of Aleppo or Mosul? Are you painting banners for the Palestinians and the Saharawis and other victims of illegal military occupations? Or does America have a grip that no other country can exert? There’s a tendency to think America is ours too. As if we’re paying some kind of membership fee, every time we watch a Hollywood movie or gobble up a Big-Mac or try on a new pair of jeans or switch on The Big Bang Theory. We subscribe to America, so we have a stake in it. But this is a dangerous notion, and with all respect to the marchers, it needs to be challenged.

No country has the blazing glamour of the USA, but sometimes it dazzles us so much, we find it hard to look elsewhere. Trump has a reason to focus on America, but what’s everyone else’s excuse? Why is it that hundreds of thousands of people can take to the streets in Europe to protest against Trump, but a similar number aren’t prepared to throw their weight against, say, the continuing demolition of Palestinian homes in the West Bank and East Jerusalem (a morality no-brainer the world continues to ignore)? Or the military occupation of Western Sahara (a country so overlooked most people don’t even know it exists)?

There are so many meteor-sized problems in our world, and America was never the place to find the solutions. Sure, climate change will be harder to tackle with a fact-bending leadership in Washington; ditto for Syria, the Israeli-Palestinian conflict, and so many other problems around the world. But you play with the cards you’ve been dealt. Maybe it’s time for the rest of the world to stop hanging on Washington’s every word, to tilt its perspective a little and stop gazing head-on at that dangerously over-glamourised land. Maybe America needs a while to deal with its own deep inner divisions. And maybe the rest of the world needs to use that time to grow out of its shadow. We should have done it a long time ago.