One of my first nomadic encounters took place, more than a decade ago, in the Palestinian West Bank. A few miles out of Bethlehem, a group of Bedouin families had pitched camp on the side of a dusty, sheep-cropped hill. Their makeshift tents were cobbled out of wooden poles, sheets of canvas and broken bits of car machinery. Dogs yapped around the camp as they encircled the flocks.

So close to Bethlehem, the Bedouin encampment was a reminder of something easily forgotten – these are the people who appear in the New Testament story, paying homage to the newborn child. It is nomads (specifically, pastoral herders) who honour Jesus and bring the first gifts. They are followed by another group of wanderers – the Magi, who like the shepherds (and nomads today) are guided by the stars. Whatever you think of the Gospel story in spiritual terms, it embodies other, often overlooked truths. Chief amongst them: in the urbanising, get-rich-quick atmosphere of the ancient Near East, wisdom and generosity often flourished more easily amongst the people who wandered the desert and the hillsides.

Why does this matter? I think it’s important to remember that so much of our heritage, in spiritual, historical and cultural terms, has been gleaned from nomadic life. So many of the Old Testament patriarchs lived the way of the pastoralist herder - the same lifestyle maintained by those Bedouin I saw in the West Bank, and by many communities across the lands associated with the stories of the Bible. Oddly enough, the most populous pastoral herding community in Europe today is the Sami, who live in Lapland – traditional home to a very different character in the Christmas story. 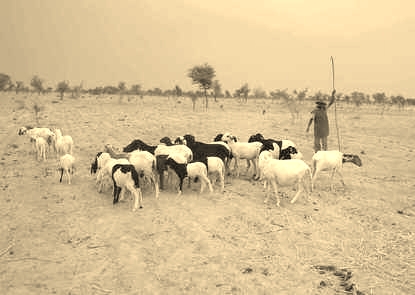